The jangly indie-pop stylings of Frankie & The Heartstrings saw Independent Venue Week (IVW) celebrations at The Boileroom in Guildford kick up a notch on Wednesday (January 28).

The Sunderland quintet have built a small, but loyal, following since the band’s chance encounter in a bar on the city’s left bank in 2008.

Their 2013 follow-up The Days Run Away spawned single Nothing Our Way and fan favourite Everybody Looks Better (In The Right Light).

In the intervening period, playing second fiddle to the likes of the Kaiser Chiefs, The Vaccines and Florence And The Machine did little to stymy a steady flow of glowing reviews.

Ably supported themselves by Wiker, Future Talks and the anarchic Arctic Monkeys-esque sneer of Woking rockers The Sheratones, there was an understandably fuzzy feeling of community at the venue on Wednesday night when the band took to the stage, slap-bang in the middle of IVW (January 26 to February 1).

It was vocalist Frankie Francis who perhaps summed up the real importance of initiatives like IVW most succinctly, quipping in his Mackem burr: “They’ve got a noodle bar here – perhaps all venues should have noodle bars!”

In many ways, there is arguably something ever-so-slightly immaterial about the actual gigs held as part of IVW, which aims to celebrate everything that is so unique and often unusual about the country’s slew of embattled independent music venues.

The Boileroom has been the last bastion of Guildford’s alternative music scene for nearly a decade and continues to thrive, despite a myriad of obstacles which have, at times, put the Stoke Fields venue at risk.

However, from Wiker through Future Talks, The Sheratones and finally Frankie, there is a sense that the crowd as much as the bands understand just what is at stake if support dwindles for venues such as The Boileroom.

And it speaks volumes of the venue’s quality and draw that it was able to swing, as part of IVW, a gig on Friday (January 30) by Weybridge chart toppers You Me At Six, which saw thousands of fans try to bag just a couple of hundred tickets.

Dapper Frankie frontman Francis quickly makes the stage at The Boileroom his own, strutting about with an air of confidence and vigour you might expect from a young Mick Jagger.

He is flanked by guitarists, founder member Michael McKnight and ex-Futureheads axeman Ross Millard, who take it in turns to briefly tear away from the band’s twee verse-chorus barrage with the occasional flash of virtuosity.

Rhythm section, bassist Michael Matthews and drummer Dave Harper, tie the band’s tight sound together, elucidating a handful of passionate sing-alongs as the gig reaches a crescendo after a slightly slow start.

Choice cuts from Hunger such as Fragile and the title track bring the band’s 45-minute set to a raucous, yet also understated finale.

The band pay their respects with a nod to the IVW before they stroll off stage and out into the crowd to wind down with their loyal fans.

It’s such a simple gesture, but one that can only be achieved at a venue like The Boileroom – and one their fans, most importantly, will remember and cherish.

Shortly after I started my job here in Guildford, I was offered the opportunity to accompany a couple of hundred teenagers from across Surrey on a trip to the infamous Auschwitz-Birkenau death camp in Poland with the Holocaust Educational Trust (HET).

Nick Clegg came along too. It was an extremely unusual and moving day, one that will stick with me for the rest of my life, as I’m sure the experience of visiting Auschwitz does for all who set foot there.

I was perhaps only three or four months into my job by the time the trip came around and I still look back at this piece with a degree of pride, if only for somehow managing to collect myself and my thoughts before regurgitating them in a vaguely coherent manner. 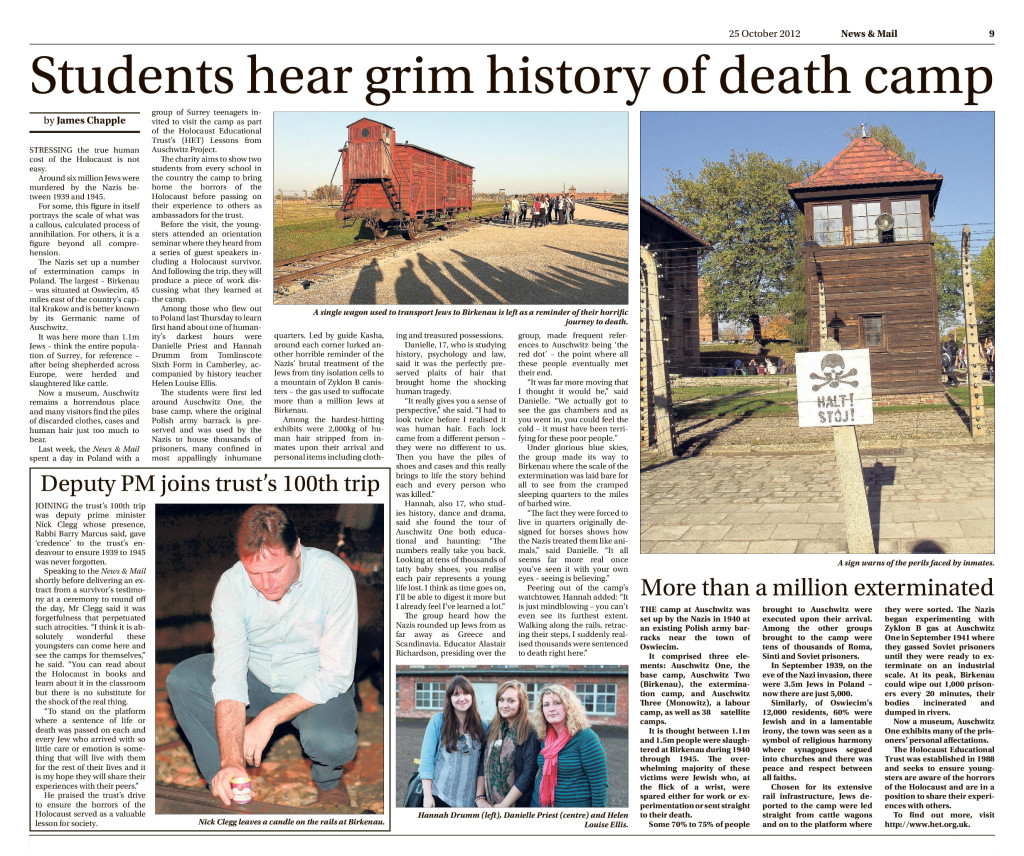 Before I wrote this post, I had perhaps cast an eye over this article once since it was published back in October 2012. It’s somewhat strange to read it more than two years later, and arguably, two years wiser.

Today (January 27) is Holocaust Memorial Day. It’s some 70 years since the liberation of the indescribably vast Auschwitz-Birkenau death camp in Poland, and 75 years since the town of Oswiecin – then, ironically, something of a beacon of inter-faith tolerance – was so cruelly cemented into the history books.

We’ve all seen pictures of the various Nazi death camps. They are, thankfully, a part of our common conscience in 2015. At best, they serve as a reminder of an atrocity the world simply cannot allow to be repeated. At worst, they hark back to an atrocity the horrors of which echo to this day, having since been repeated in Congo, Armenia, and at Srebrenica during the Bosnian War, among others.

But nothing, absolutely nothing I’ve ever seen, compares with gazing out of one of the central guard towers at Birkenau, the biggest of all the Nazi death camps. It is simply breathtaking. You can’t process it there and then. The fact I can recall it so vividly more than two years later is perhaps an indication of the time is has taken, and continues to take, me to rationalise it.

Fortunately, Times journo Hugo Rifkind has managed to do so in a far more succinct and eloquent manner so I heartily suggest reading his post for the HET, which was published on Sunday (January 25).

In my postbag of January 1, I found this tale of woe.

Sadly, I wasn’t granted right of reply as the sender decided to hide behind a rather hackneyed pseudonym. I feel in the interests of balance, it should be republished forthwith. 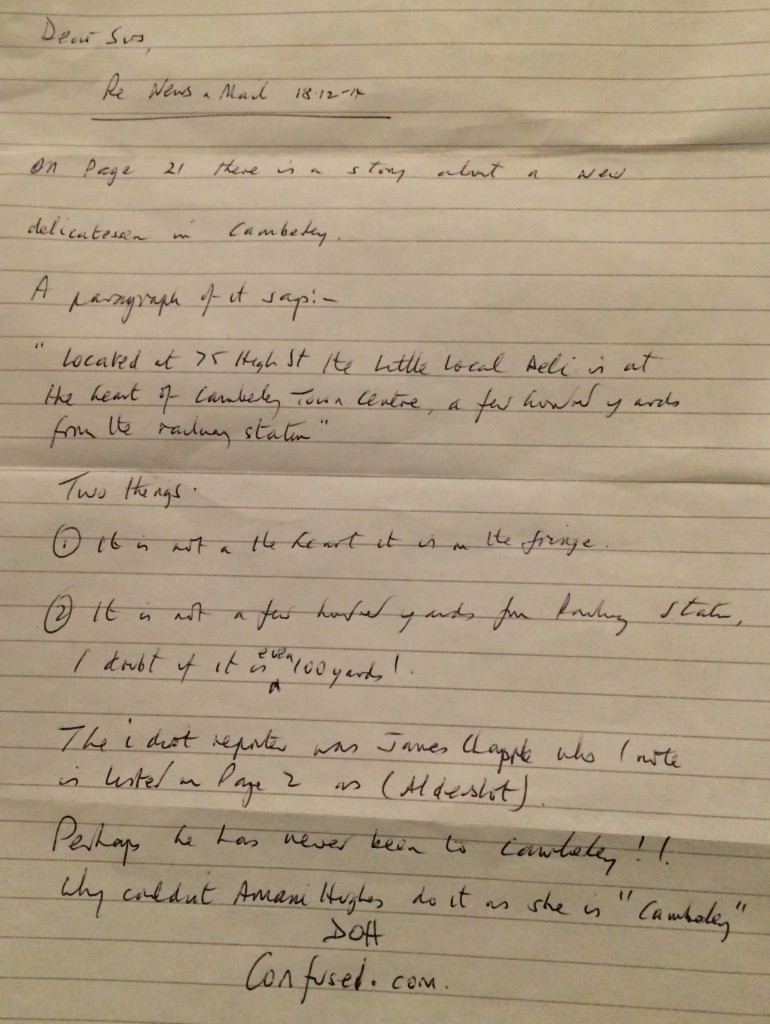