This morning, I tried to buy tickets to see Royal Blood.

For the uninitiated, Royal Blood are a hugely talented two-piece drum and bass act who properly rock. In 2014, this is something of a rarity.

Their self-titled debut shot straight to number one this week, the first rock act to score a UK number one in the best part of three years. This morning, they sold out a two-week UK tour in just two minutes.

So far, so good. It’s been a meteoric rise for bassist Mike Kerr and drummer Ben Thatcher – and it is richly deserved.

I caught the duo at this year’s Glastonbury Festival and they put on a truly exceptional show. Like their forebears Death From Above 1979, they make enough noise between the two of them to put most other bands to shame.

But here’s where things turn sour.

Come October, it will be ten years since I went to my first ‘proper’ gig – Franz Ferdinand at Exeter University Great Hall, if you were wondering. Their debut album had just come out, it was great.

Since then, I’ve travelled all over the country to see bands, and rarely – if ever – have I been unsuccessful in bagging myself tickets. Now, that does not in any way go to say I am somehow ‘deserving’ of a spot at any show that’s going.

So at 8.45am this morning, I was online, ready, Seetickets and Ticketmaster tabs open, wallet on standby, and with another friend at home doing the same.

I knew it would be a bloodbath (‘scuse the pun); Royal Blood have become an almost overnight sensation. They are riding the crest of a bloody tidal wave.

By 9.02am, tickets had sold out, although not before I’d managed to enter all my details on Seetickets and hit ‘Buy Tickets’.

With a relieved sigh, I lent back in my chair, only to be told tickets had in fact sold out and that my transaction could not be completed. What kind of two-bit ticket retailer doesn’t hold your order while you enter your payment details? In fact, I’m sure Seetickets USED to do this. Hmm.

Suffice to say, my friend had similarly scant fortune. We were buying on behalf of two others too. Our little group weren’t off to see the band. Boo-friggity-hoo. It happens.

It was then I noticed Twitter was bursting at the seams with people sharing our frustration, spewing their spite, bile and vitriol over websites like ViaGoGo and GetMeIn.

If you haven’t heard about these sites, they are – in short – a pernicious, evil blight on Britain’s live music scene. While I stop short of saying they actually sound out people to buy up dozens of tickets to flog at grossly inflated prices, this is nonetheless the result.

Within minutes, there were HUNDREDS of tickets for sale for Royal Blood gigs up and down the country, with prices ranging anywhere from £50 to £100+. Face value, the tickets were £15.

Excuse me while I simmer down a moment.

Here’s a snapshot of ViaGoGo I took shortly before 9pm tonight, a full 12 hours after the tickets ‘sold out’. 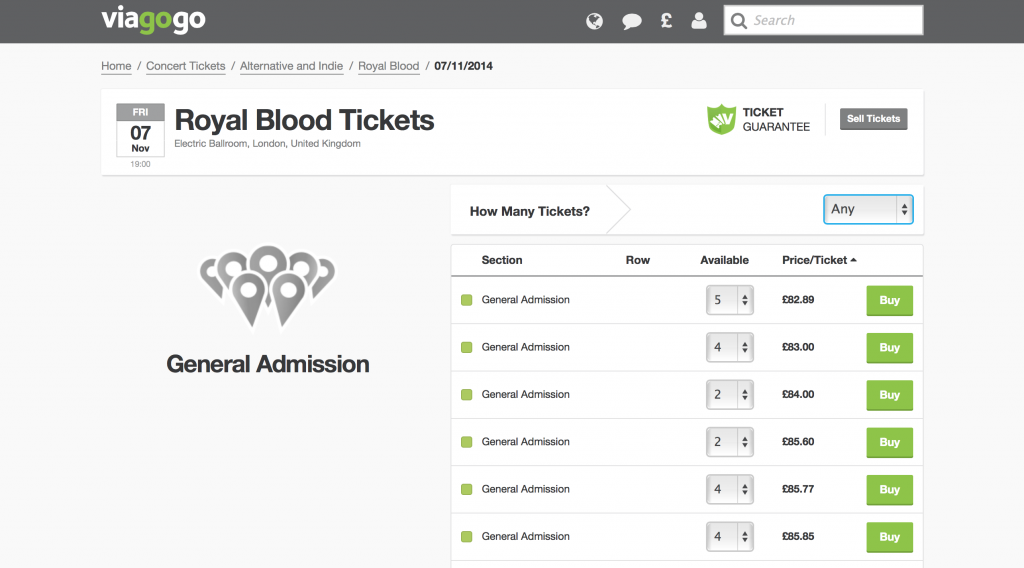 This is legalised touting. There is no other way to put it. And that snapshot is only the cheapest end of the scale. Some ViaGoGo users are quoting up to £150 for a single ticket for Royal Blood’s second show at the Electric Ballroom in Camden on November 7.

When I counted them up at 9pm, there were 85 tickets available – Electric Ballroom can only hold around 1,000 people. That’s nearly ten percent of all the tickets sold being touted. And that’s before you include all the ones desperate fans have already snapped up (there were as many as 150 on ViaGoGo earlier for this gig alone), all the ones being sold on other sites like GetMeIn and eBay, plus all the tickets that will be touted outside the venue.

I’d say that means around a quarter of all the tickets for this show will likely be sold to fans above face value which, if you remember, was just £15. I can feel that red mist descending again.

A couple of years ago, ViaGoGo fought tooth and nail to stop Channel 4 airing its terrific Dispatches documentary, The Great Ticket Scandal. They even took out an injunction. This is how lucrative this swizz is. Thankfully, Channel 4 won. There was clearly a strong public interest reason for showing this piece.

Stand outside any sold out gig for a couple of minutes and you will no doubt be serenaded with a chorus of ‘TICKETS! BUY OR SELL!’. Transpose this onto the internet and you have ViaGoGo and GetMeIn. They rob genuine fans of the opportunity to share a moment with their idols and their fellow fans. They are pricing out the average gig-going member of the public.

When I first started going to gigs ten years ago, a club show in some grotty toilet venue would cost you £5, a typical academy or university £10-£15, an arena £25-£30.

You can double if not triple those prices these days. Yes, lessening revenue from album sales has played a part in this, but nonetheless, live music is now a huge money-spinner. It has also an increasingly trendy – dare I even say bourgeois or yuppyish – way to spend an evening, irrespective if you give a toss about the music. For some people strolling into work and being able to say, ‘yeah, I went to a gig last night’ gives them the same insta-kudos Gordon Brown thought he would get by chucking his Arctic Monkeys fandom around willy nilly. Eugch.

Heck, GetMeIn is, and I quote, Ticketmaster’s ‘official ticket marketplace’. ViaGoGo, meanwhile, is affiliated with Festival Republic, one of the country’s premier festival organisers (they put on Reading and Leeds, among others).

These sites are being condoned by the very industry selling the tickets in the first place. This is blatant, vile collusion. I’ll save their utterly ridiculous ‘booking fees’, ‘transaction fees’ and now ‘printing charges’ for another rant.

Actually, no, seeing as a printing charge is a new one on me, I’d like to take this opportunity (or I would have, had I got a ticket) to thank-you Ticketmaster for charging me £3 for the privilege of printing my own ticket at home, with my own paper and my own ink. I just hope that £3 is enough to compensate you for your troubles.

The catch, sadly, is the great British public. People will readily pay these prices and these charges. I have, I admit, on one or two occasions, paid a few quid extra to swag a ticket off eBay – but never from these so-called official resellers. A sea-change could only be effected if we, en masse, stop giving these sites our money.

But that won’t be enough. The Government has tried to act on this but failed miserably, although why should it care, really? It’s a small fry, so far as issues go.

The acts themselves? Yeah, good luck with that. A few bands have tried some increasingly innovative ticket selling methods, but these are usually logistically cumbersome and tricky (read: expensive) to operate and police.

No, this is a revolution that must be led by the gig-going public. We must embrace ethical ticket exchange programs (RIP Scarlet Mist), we must not pay these hugely inflated, extortionate prices, we must not be bullied by these sites.

Of course, the sooner the acts themselves, the venues, the industry and the Government puts their oars in too, the better.

EDIT: Contrary to the above, I’ve just discovered Scarlet Mist is still going. Use it.